Creating an Event – All event directors have to register their tournament through the Amateur Disc Golf website at www.AmateurDiscGolf.org. There is a button on the Homepage titled “Create An Event,” which links directly to the Disc Golf United Amateur Disc Golf page. 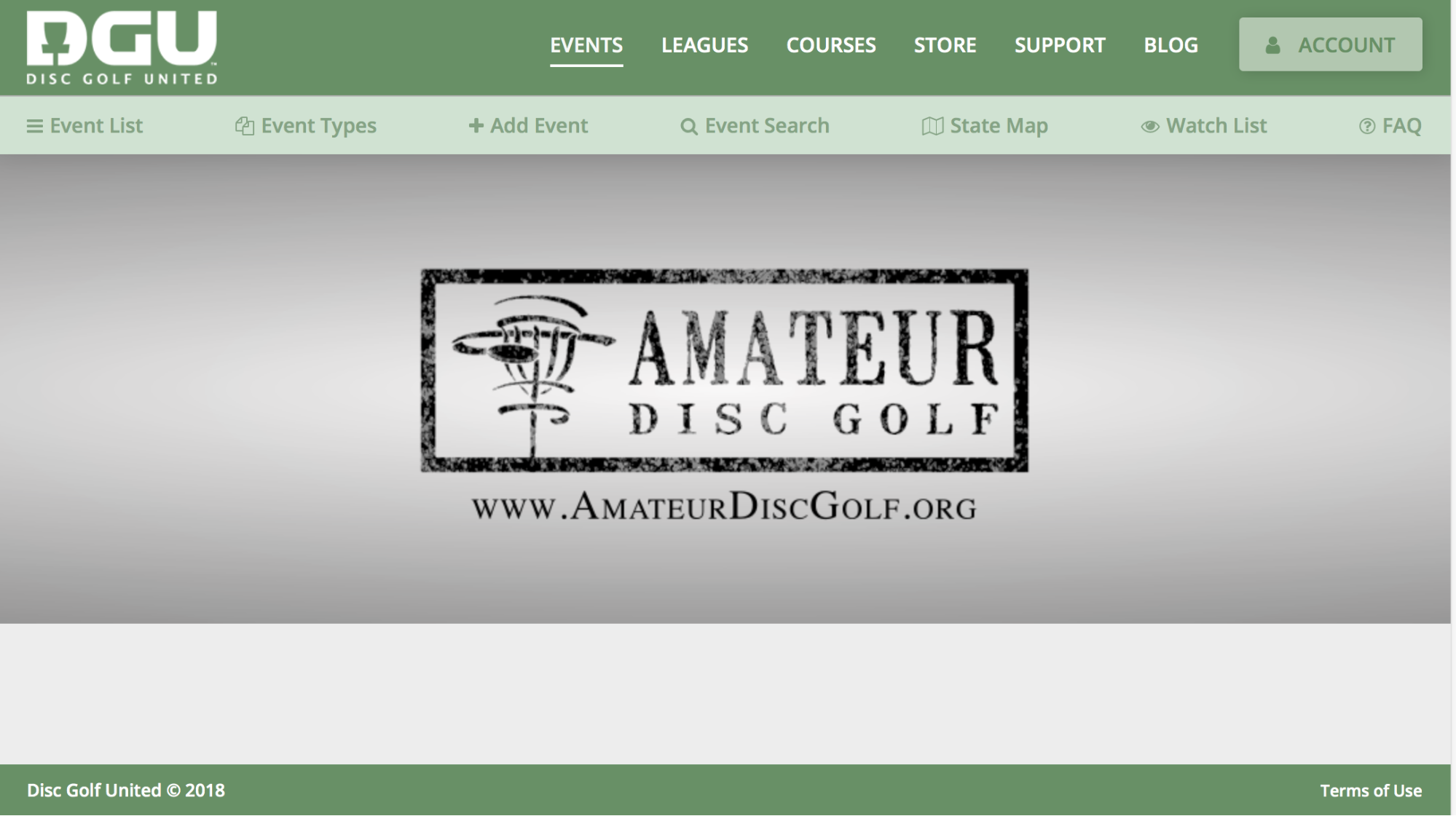 Event directors need to click on the “Add Your Event” tab on the lower left part of the page. 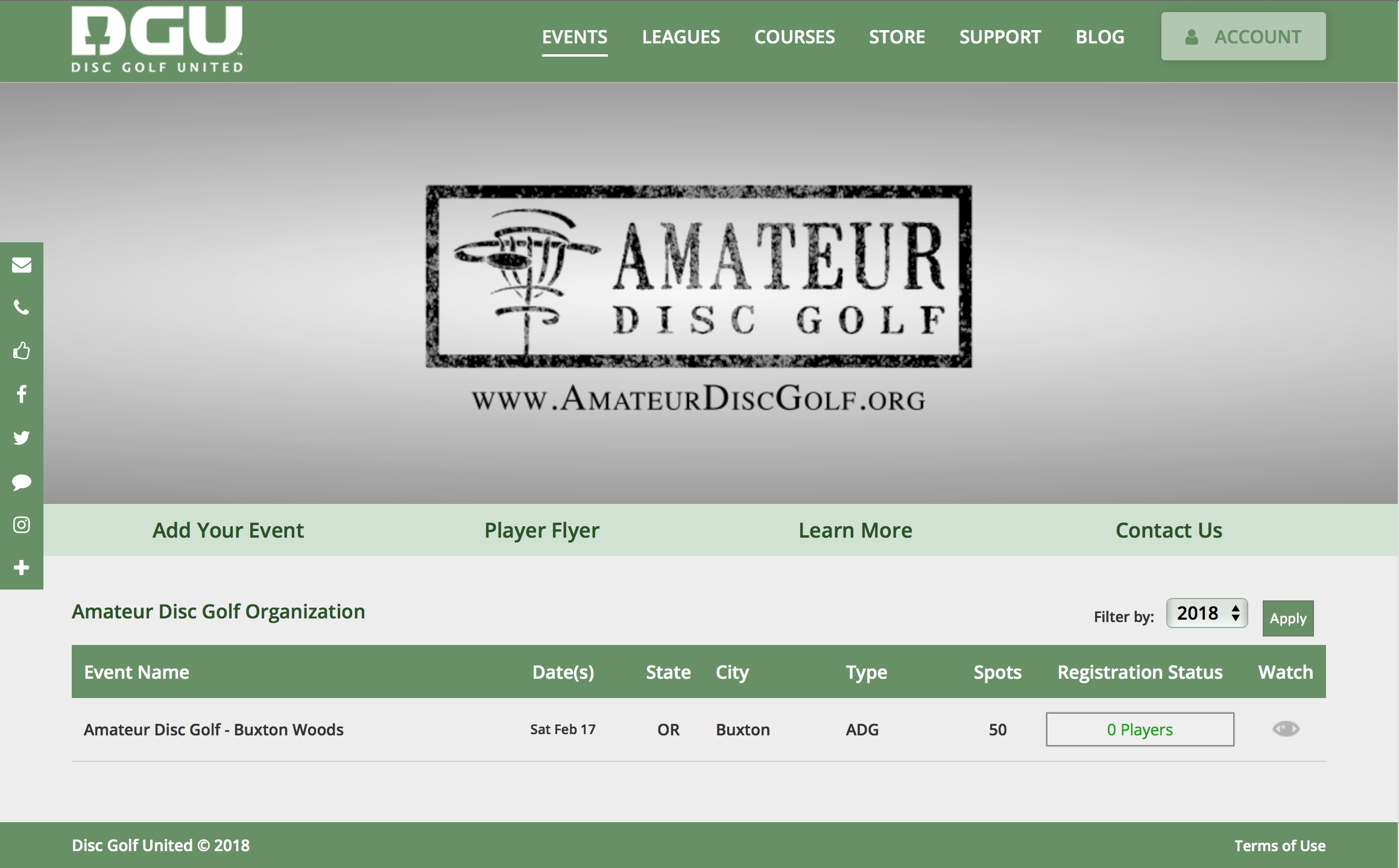 All event directors are required to login in order to create a new event. Persons new to the DGU will have to create an account by clicking on the “New Subscriber” button on the Event Login page. 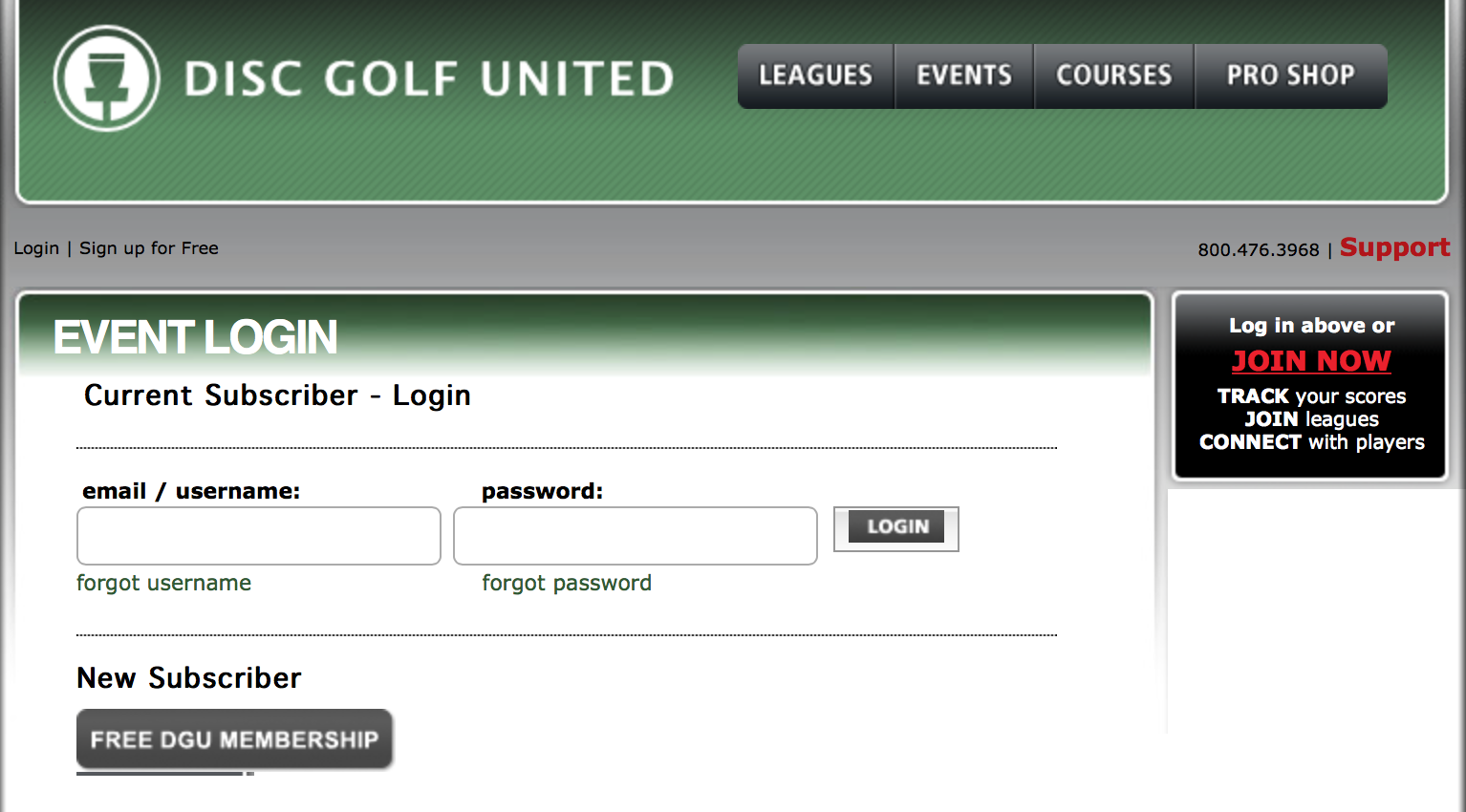 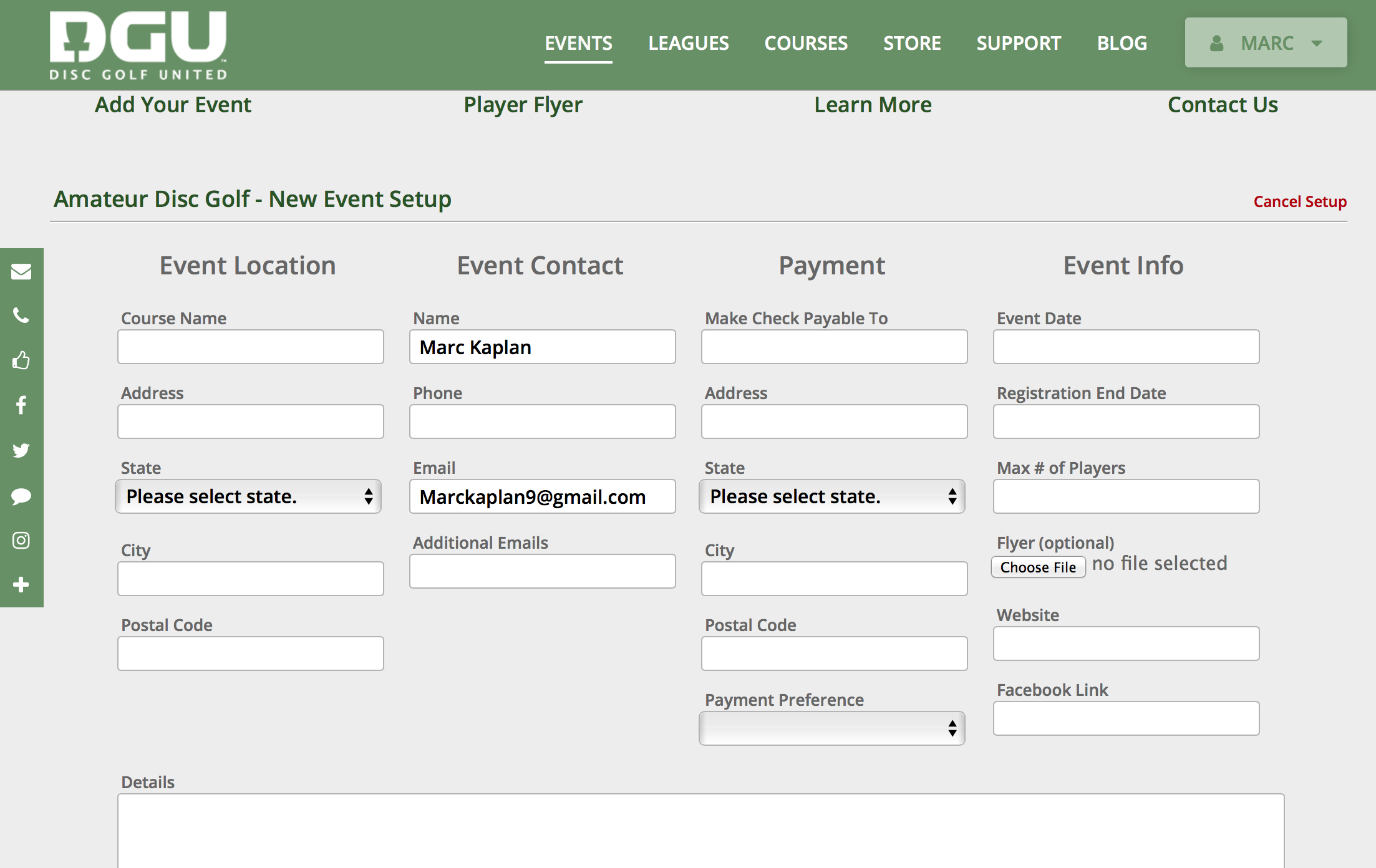 Event Promotion – The event directors are responsible to promote the upcoming tournament. It is a good idea to promote the event using social media as well as posting printed flyers at the course. It is also advisable to advertise the tournament on the local disc golf club’s event calendar. We highly recommend creating a Facebook “Event Page.” There are instructions how to do so in the “Document” section of the ADG website. Facebook events are a great way to create a buzz for an upcoming tournament. Facebook friends are notified each time a player says they are “interested” or signs up as “going.”

Disc Delivery to Event Directors – Event directors will receive a shipment of discs from DGU a couple of days prior the weekend tournament. The new discs will be provided for all of the players who pre-registered on or before the Sunday prior to the tournament. As an added benefit there is no shipping cost incurred by the event directors.

Throwing Clinic – All event directors are encouraged to conduct a 15 to 30 minute throwing clinic prior to player’s meeting or after awards ceremony. This is one of the key attractions to playing at an ADG sanctioned event in addition to the free disc and single round. Event directors are encouraged to focus on putting, approach shots or driving techniques. The clinics should always include discussions on stance, grip and disc selection.

Player’s Meeting – Event directors should be cognoscente that there will be beginners as well as first timers playing in their first tournament. Special attention should be given to the most basics rules like throwing order, scoring a hole, OB, 10 meter rule, shot gun start, etc.

Reporting – Event directors are responsible to make a diligent effort to get tournament results emailed to the DGU as soon as possible after the conclusion of the event. This will enable the prize awards to be claimed in a timely fashion. Prize awards are the same for all tournaments. The prize award chart lays out all of the awards based on the number of players in any given division. Event directors will be provided with an automated form that will calculate the awards for all of the winners in each division. 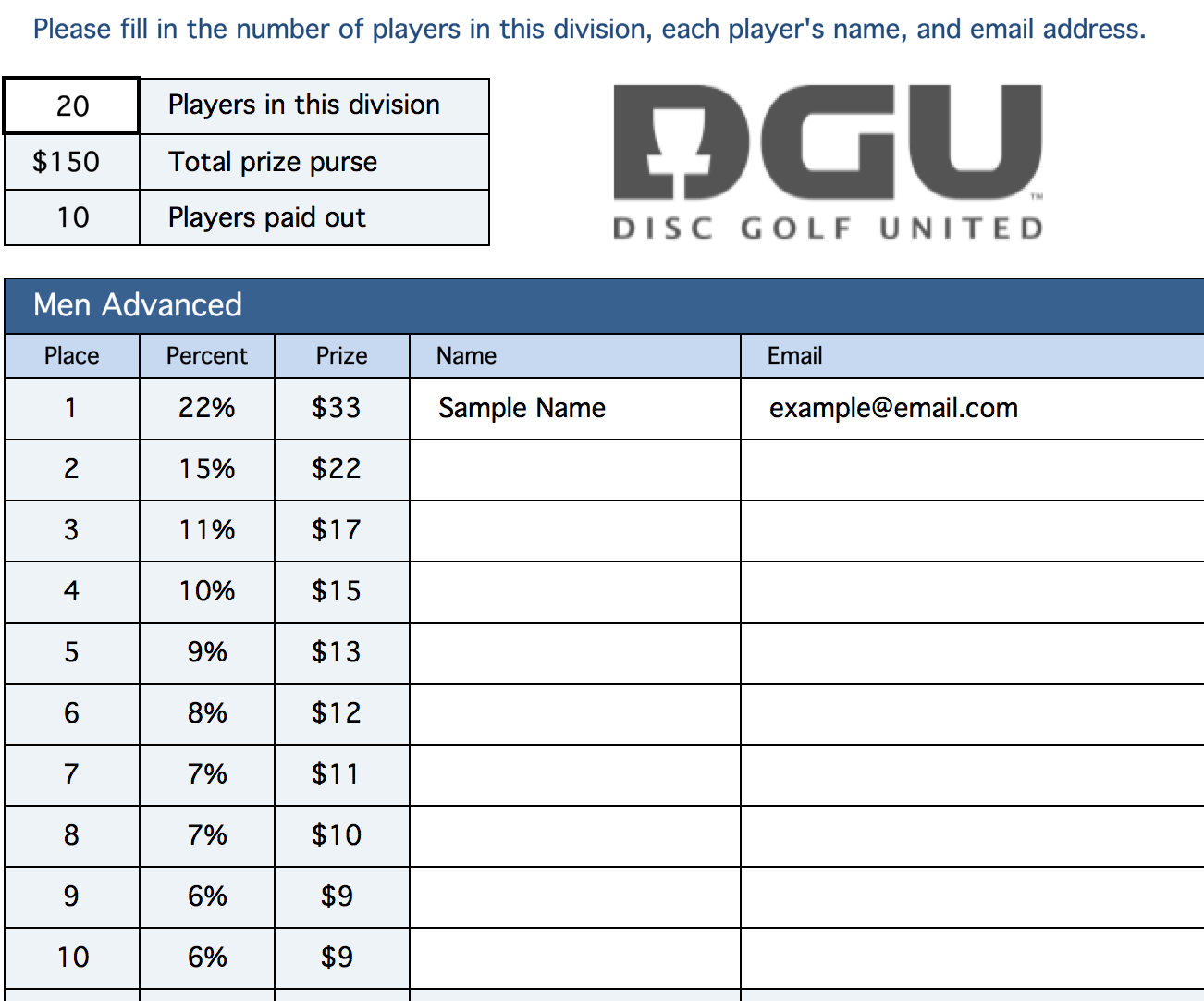 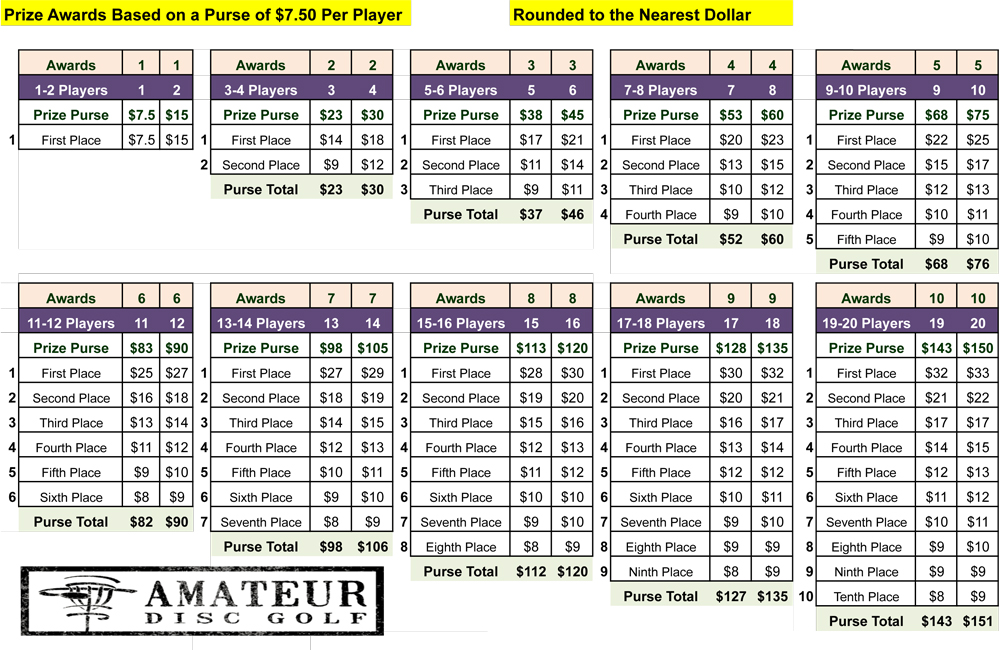 Registering for an Event – All players need to go to the ADG website. They will find a button on the Homepage titled “Player Registration.” This button will lead players to the DGU Login page. Players need to pre-register before or on the Sunday prior to the event in order to qualify for the free player’s package disc. 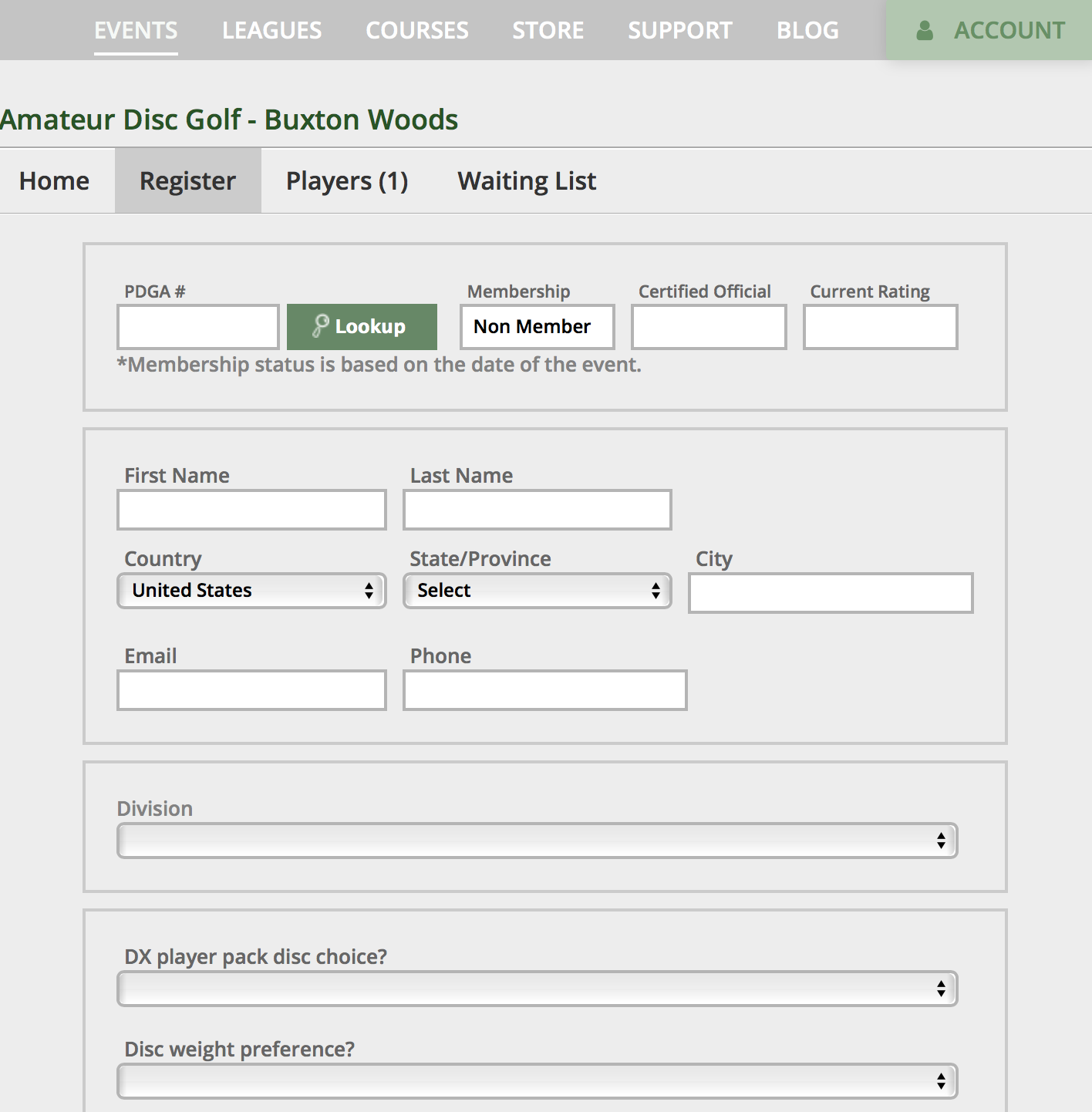 Throwing Clinic – Tournament event directors are encouraged to run throwing clinics prior to the start of player’s meeting or after the awards ceremony. These clinics will vary based on what the event director wants to demonstrate that week.

Player’s Meeting – The event director will hold a player’s meeting before the start of every tournament. They will discuss various conditions on the course followed by announcing hole assignments. Players will report to their staring holes at he conclusion of the meeting.

Tournament Play – Most tournaments will begin with a shotgun start. Players are required to complete on 18 holes to qualify for prize awards. Players are responsible for making sure that their score is added up correctly. Rules of the game will coincide with rules established by the Professional Disc Golf Association – PDGA.

Claim Award Prizes – All players can claim their award prizes by clicking through on the “Claim Award Prizes” button on the ADG Homepage. This links directly to the DGU Store where players can trade their prize vouchers for a variety of disc golf products. Players will be very grateful to have a huge variety of discs and other disc golf accessories to choose from. They can wait and accumulate prize vouchers in order to purchase larger or more expensive items. Players will have up to a year to redeem their prize awards.

* Rules of the game should always default to the 2018 version of the PDGA Rule Book. The latest version can be found on the Amateur Disc Golf website.

Safety First and Common Courteous – Always be aware and respectful of people around the playing area. Many disc golf courses are located in public parks. Right of way should always be given to park users. Please remember to remain quiet and avoid unnecessary movements while other players are throwing. It is also common throwing etiquette to stand behind and out of the eye line of the player who is throwing until the throw is complete.

Throws – Tee throws must completed within the designated tee area. Subsequent throws are determined when a disc is released in order to change its position creating a new lie.

Order of Play – The playing order for the first hole is established by the order of names on the scorecard. Subsequent throwing order is established from the scores on the previous hole going from lowest to highest. After throwing, the player whose disc (lie) is farthest from the target throws first.

Excessive Time – The time limit for throws are not to exceed 30 seconds once a shot is marked and clear of distractions.

Marking a Lie – The lie is the spot where a previous throw has landed. Once a disc is thrown and lands it can be marked by placing a mini marker disc in front of it or by using the disc on the ground as a mark for the lie. When using a mini marker disc you are provided an 8-inch (20cm) by 12-inch (30cm) area to place your plant foot behind the marker disc.

Unplayable Lie and Lost Disc – Any disc that comes to rest 2 meters above the ground is considered an unplayable lie. The disc must be thrown from a lie on the ground, directly underneath the unplayable lie or relocated to avoid damage to the vegetation. Discs are considered lost after the entire group spends 3 minutes to try to find it. When a disc is not found the lie should be placed at the place it was seen.

Putting Area – Players must establish balance behind a lie when it rests closer than 10 meters to the target.

Out of Bounds Lie – A disc that lands out of bounds needs to be played from a point 3 feet in-bounds from where the disc went out of bounds. Event directors will address out of bounds areas prior to play.

Completing the Hole – Disc must come to rest in the chains or the tray of the target. Resting on top or the through the side of the target does not count and will require an additional throw to complete the hole.

One Round Tournament Format

Registration – All players must pre-register for the event by going through the Amateur Disc Golf website at www.AmateurDiscGolf.org. There is a button on the homepage titled “Player Registration.” This will lead players to the DGU event sign up page. All players must create an account in order to register and redeem potential prize awards. Registration can be open as long as the event director chooses prior to the start of the throwing clinic.

All of the players who pre-register before or on the Sunday prior to the tournament will receive a free disc. Players will be able to choose from a variety of molds and weights. The discs will be distributed to players’ before the throwing clinic.

Throwing Technique Clinic – Event directors will lead a throwing technique clinic focusing on a particular feature of the sport such as putting, approach shots or driving. Every clinic will include a discussion about disc selection, grip and various techniques and should run 15 to 30 minutes in length. There is a document titled “Throwing Technique Clinic Format” on the ADG website under the Documents section.

Player’s Meeting – The event director will explain the basic rules of the game. An outline of the rules are in the Document section of the ADG website titled “Basic Guidelines for Tournament Play.” It is important to go over the very basic rules of the game because there will most likely be a number of novice players and some people playing in their first tournament.

Hole Assignment and Scorecard Distribution – The player’s meeting will conclude by players being assigned to their designated starting holes. Directors should use a shotgun start, which should occur 2 minutes after the group furthest from the players’ meeting area has reached their hole.

Awards and Acknowledgements – The event director will inform the field of the winners in each division. They are encouraged to let the field know about the next ADG event and to promote other upcoming events in the area.